Home | Who We Are | About our Church

If you would like to take Holy Communion but are unable to walk to the front, please let us know and we can arrange for the bread and wine to be brought to your chair.

We have an audio loop system operating in the whole of the worship space and we have a fully accessible disabled toilet.

If you're thinking of visiting and have any questions about accessibility or would like someone to help you into Church, please phone the Church office on 0113 257 7843 and we would be happy to help you.

The building of St. Lawrence Church

David Jenkins, a native of Cardiganshire, was just 27 years old when he came as incumbent of Pudsey's Chapel of Ease (All Saints) in 1814. Mr Jenkins was one of the first incumbents in the country to apply for a grant to build a new church under the 1818 Church building act. This act became known as the Million Act because a million pounds was made available for building new churches especially in the industrial north.

St. Lawrence, Pudsey was one of the first of these churches to be built and the third most expensive in the first Parliamentary Grant

The first stone was laid by Mr Jenkins on 19 July 1821. No expense seemed to have been spared. The use of Westmorland slate instead of local stone would have added much to the cost. The slaters appear to have come from Westmorland, as in the church graveyard is a headstone: In Memory of John Johnson, blue slater, a native of Bowness in Windermere who unfortunately lost his life by a fall at this Church on 6 April 1823 aged 23 years.

Even with a regular labour force of about thirty the building took three years instead of the estimated two.

The Consecration and after

The Church was consecrated by the Archbishop of York on 30 August 1824.

The morning was ushered in by the ringing of bells and a flag hoisted on the south west pinnacle of the steeple. It was estimated that 2500 spectators attended. When silence was obtained the Archbishop led the long procession up the aisle repeating the 24th psalm. Mr Jenkins preached from the text: This is the house of the Lord God (1.Chron xxii 1). Followed by the 100th psalm and Luthers Hymn

It must be remembered that the original Georgian building was a very plain, austere one, with little ornament and intended to hold 2000 people on 2 levels.

The windows were of clear diamond leaded glass, the walls whitewashed and the floor stone flagged. Plain deal timber pews ran the full length of the nave, and extended across the nave and both the side aisles.

All five arch spans were therefore filled with pews, a total of 30 metres in length and about 22 metres in width (i.e. 100 feet long by about 75 feet wide).

The organ was high on the west wall above the gallery, accessed by a doorway that can still be seen as an indented arch. The only real ornamentation was the groined ceiling with plaster coving and bosses, and the plasterwork on the ceiling under the gallery. The upper ceiling was a change to the original design, resulting in a lower level than planned as can be seen in the way it cuts across the stonework at the top of chancel arch.

Pudsey Parish Church has been reordered several times since it was first completed and consecrated in 1824.

It has given the church a new, intimate shape to the worship space, comfortable chairs and a modern heating system. There is easy wheelchair and pushchair access to all the ground floor rooms. Three meeting rooms are available (two on the first floor), along with a kitchen, a special room for young children, plenty of toilets and a baby change station. 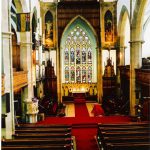 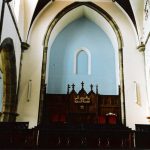 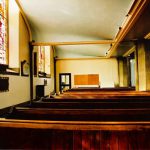 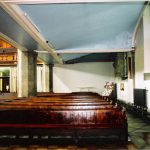 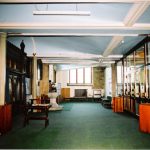 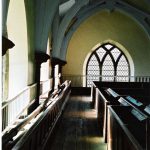 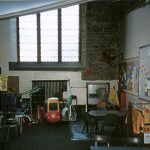 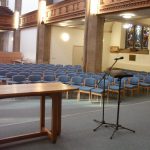 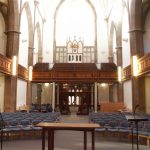 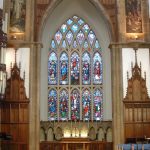 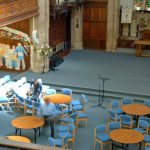 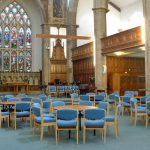 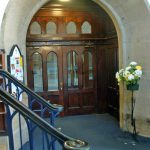 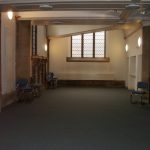 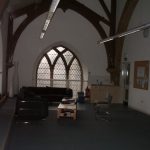 The Brindley and Fosters Organ❯

THE BRINDLEY AND FOSTERS ORGAN

Situated at the north of the Church to the left of the chancel is our magnificent organ. Installed in 1873, it was made by Messrs Brindley and Fosters, Organ Builders of Sheffield and cost approximately £1,300. The quality of workmanship on this organ is outstanding, with huge pipes and wood carvings. The bellows were originally powered by steam but still needed the assistance of a blower. An electric motor now drives the air pump. The sound of the organ fills the whole of the church during our services.

The eight bells were recast and rehung with partly new fittings A.D. 1957, by the Whitechapel Bell Foundry, London.

If you're interested in bell ringing at Pudsey, please email Susan Kelk at bellringers@pudseyparish.org.uk, or phone 07950 482920.
Practice night is on a Monday from 7:30 p.m. to 9 p.m.
You can hear our bells here.  This was posted on Youtube by Briony, now an ordained minister, who originated from our church.

The band are members of the Yorkshire Association Of Change Ringers - this site also has brief ringing details for St Lawrence & St. Paul, Pudsey.

Made by Potts of Pudsey (now Smith of Derby) and installed in 1864.

Towards the end of the 20th Century various (mostly electrical) faults occurred, so the chimes ceased to work.   The clock often stopped, which was found to be due to the pendulum catching on the casing that covers the pendulum in the room below the clock room.

As repairs were being assessed, it was discovered that it would require a replacement if the autowinder motors and mechanisms, and that the stone supports on which the mechanism was mounted had cracked.

In all, a total of about £11,000 was spent to complete all the necessary clock and structural repairs.

The St. Lawrence and St. Paul Parochial Church Council are grateful to the parishoners, Leeds City Council, Pudsey Borough Charity, and an anonymous donor for their grants and donations that have supported the PCC in effecting these repairs. We also want to thank the various companies involved in the repairs, especially Terry Hill of Potts.

The clock was restarted at 12 noon on Monday, 19th April 2007, following a short Prayer Service that was attended by our Local Councillors - Mick Coulson, Josie Jarosz and Richard Lewis, our clergy - the Revd. Paul Ayers and Revd. Andy Greiff, and a number of Church members.